Ledra Street (Greek: Οδός Λήδρας Odos Lidras, Turkish: Lokmacı Caddesi or Uzunyol) is a major shopping thoroughfare in central Nicosia, Cyprus, which links North Nicosia, the part of the city under the control of the de facto Northern Cyprus, and south Nicosia.[1]

It is the site of the former Ledra Street barricade, across the United Nations buffer zone. The barricade symbolised the division of Nicosia between the Greek south and Turkish north. It was removed in April 2008 and Ledra Street became the sixth crossing between the southern and northern parts of Cyprus. Ledra Street runs parallel to Onasagorou Street.

The name of the street refers to the ancient city-kingdom of Ledra, established in 1050 BC, that was located in the centre of the island where the capital city is today. 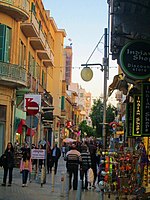 Ledra street in the afternoon.

The street leads off Eleftheria square, runs in a South to North direction and is about 1 km long. Most of it lies within the area effectively controlled by the Republic of Cyprus while a short stretch at the northern end between the UN buffer zone and the intersection with Arasta Street and Girne Caddesi falls within the Turkish part of Nicosia.

Traditionally, Ledra Street was the main shopping street of the capital, although in recent years it has been superseded by more accessible streets further out from the centre. Properties on the street are largely for commercial use and command some of the highest real estate prices on the island.[2]

During the EOKA attacks that ran from 1955–1959, the street acquired the informal nickname The Murder Mile in reference to the frequent targeting of the British military by nationalist fighters along its course.[3][4]

The sealing of Ledra Street

In 1963, during the outbreak of hostilities between the Greek and Turkish Cypriot communities following the announcement of unilateral amendments to the Cypriot Constitution by request of Greek militant organizations, Turkish Cypriots withdrew to North Nicosia which became one of the many Turkish Cypriot enclaves which existed throughout the island. Various streets which ran between the northern and southern part of the city, including Ledra Street, were blockaded. A ceasefire was arranged at the end of 1963 and a neutral zone was established along the ceasefire or Green Line between north and south Nicosia which was patrolled by British personnel. With the formation of the UNFICYP, the task of patrolling the Green Line and protecting Turkish Cypriot enclaves was taken over by UN troops.[5]

During Turkish army’s invasion in Cyprus in 1974, Turkish troops occupied northern Nicosia (as well as the northern part of Cyprus). A buffer zone was established across the island along the ceasefire line to separate the northern Turkish controlled part of the island, and the Greek controlled south. The buffer zone runs through Nicosia, where it is sometimes just several metres wide, and all roads running through the zone have been effectively sealed.

The street south of the blockade was largely pedestrianised in 1998.[6]

In December 2005, as talks between the north and south on the reopening of Ledra Street were on-going, the Turkish Cypriot side demolished the wall between the north and the UN buffer zone and began constructing a footbridge just north of the UN buffer zone.[7] The move attracted protests from both the Greek Cypriot side and UNFICYP.[8] The former expressed concerns over security, saying that the bridge allowed easy access for Turkish armed personnel in the buffer zone, while the latter said although there was no infringement of the buffer zone, it could not support the move to reopen Ledra Street at that time because the actions had not been agreed to by both sides. The Turkish Cypriot side removed the footbridge on 9 January 2007, a move which was welcomed by UNFICYP.[9] 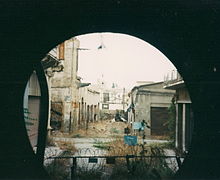 On 8 March 2007, the Greek Cypriot government demolished the wall between the southern portion of Ledra Street and the UN buffer zone and replaced it with 2m-high screens. Then Greek Cypriot president Tassos Papadopoulos said the Cyprus government had unilaterally planned for the dismantling of the Ledra Street wall. He added that with demolition of the wall, his government would consent to the passage being opened if Turkish troops which were present in the area were withdrawn, the derelict buildings on either side of Ledra Street strengthened and Turkish troops allowed UNFICYP to check for landmines. He reiterated that the obstacle to the opening was the presence of the Turkish troops and not the barricade.[10] The move was immediately welcomed by the United Nations and several world leaders.[11]

Dimitris Christofias was elected president of Cyprus on 24 February 2008 on a platform of solving the Cyprus problem. In his first meeting with Turkish Cypriot president Mehmet Ali Talat on 21 March 2008, the two leaders agreed to reopen Ledra Street “as soon as technically possible”.[12][13] The United Nations Development Programme “Partnership for the Future – Mine Action Centre” proceeded to clear the area of mines on 26 March 2008, and work began to shore up the buildings flanking the street to ensure that they will not pose any danger to the users of the crossing.

Opening of Ledra Street in April 2008.

On 3 April 2008 at 9 a.m. local time (06:00 UTC), the Ledra Street roadblock crossing through the UN buffer zone was reopened after 34 years, in the presence of Greek and Turkish Cypriot officials who cut a ribbon in Kykkou street, the road between Ledra Street and what is known as Lokmaci point in the Turkish controlled part of Nicosia. Addressing the ceremony, Presidential Commissioner George Iacovou said this day is “an auspicious occasion” as it signals the opening of the fifth crossing point in Cyprus. The International Herald Tribune reported that officials released balloons to mark the event at the end of an opening ceremony.[14] Immediately afterwards, citizens from both sides began using the crossing.

However, later in the day at 9 p.m. local time (18:00 UTC), the Cypriot police closed off the new Ledra Street checkpoint due to a violation of the agreement by the Turkish forces, whose guards penetrated deep into the UN controlled buffer zone. A Cypriot Police source said that two Turkish Guards had refused to leave the buffer zone which was agreed to remain under full UN control. The Cypriot authorities considered the move a breach of the agreement between the Greek Cypriot President and the Turkish Cypriot President and therefore quickly sealed off the checkpoint.[15] After the arrival and mediation of UN officials, Turkish Cypriot forces withdrew back to their ceasefire positions and the crossing was reopened by the Cypriot Police.[16]

Poster of the exhibition about the world of Cyprus at Leventio Museum.

“Elephants for Peace”[17] with a contribution of about 600 objects referring to elephants, such as images or sculptures, succeeded in transforming the frontier line at Ledra Street into a place of festivities for two days on the 9th and 10 May 2009.[18][19][20] Rarely has it better been explained than in a letter from Eleni Mavrou, Mayor of Nicosia “…As previously expressed, the Nicosia Municipality sincerely supports and warmly welcomes this creative contribution to dialogue across dividing lines around the world. The idea of representing the desire to cooperate and communicate by means of art is both innovating and appealing. Furthermore, the choice of an elephant as a theme for this artistic initiative is not only appropriate but also insightful. We believe it will resonate with citizens of all ages, on various levels…” Eleni Mavrou, Mayor of Nicosia, March 26, 2010 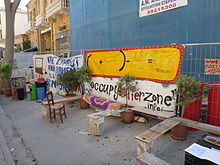 “The Gynaikobazaro” is a market exclusively for women and takes place every Saturday.

The buffer zone between the checkpoints that divide Ledra street was used as a space for activism from the 15th of October 2011 up until June 2012 by the Occupy Buffer Zone movement.[21]

Ledra Street has been the starting point of protesters and activists against the austerity imposed by consecutive Cypriot governments such as cuts in civil service salaries and social benefits after the Credit crunch.

The southern part of Ledra Street is the starting point of Cyprus’ annual Gay pride parade initiated in 2014 by the Mayor Constantinos Yiorkadjis.[25] The event was organised by the association “Accept-LGBT Cyprus” which is open to all regardless of age, gender, sexual orientation, ethnic, cultural background, religious background, language, health condition or physical condition and supports equal rights for the LGBT community.

View all posts by ledras →